Update: It’s now 7 years after I wrote this article and all of the pieces I’ve included in this post are things I’m still using! It works!

I’m sick. This has been a bad year for colds in our home. My youngest boy started school and he loves to germ up while he’s there and then come home and share! I love my little walking petri dishes, but I am tired of the viral circus that they star in! 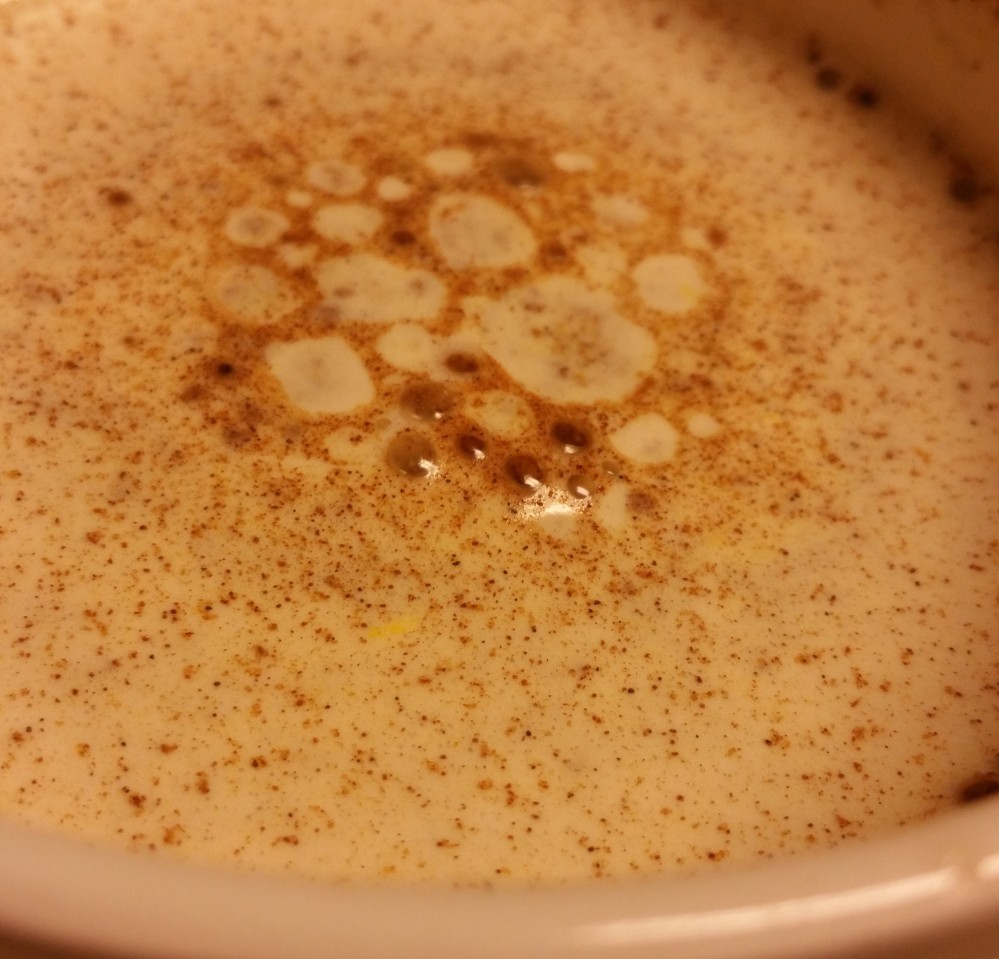 About a decade ago I decided I was going to go all herbal with my remedies. I had good intentions, but eventually there were some things I found Western medicine necessary for. Cold viruses were not one of them. These little nasties are not treated here in the US by doctors. Your every day US citizen doesn’t have a cold treatment repertoire much outside of half-hearted attempts to use echinacea or zinc.

I have a wonderful friend from South India who grew up near Hyderabad. She was my roommate for a quite a while and I learned a lot about Indian culture through our friendship. As our friendship grew: I started a journey into trying to understand the Hindu religion, the caste system she was expected to marry into (which is quite a departure from my decidedly Western viewpoint) and her view of Ghandi (which was not what I expected, but that I respect). I grew to appreciate her views, as I attempted to glimpse the world through my friend’s perspective on reality, by asking lots of questions and visiting her temple (the service always seemed like a huge party and everyone is fed at the end). During this time I also fell in love with South Indian cuisine. Turmeric has a vital role in those curried dishes.

While I attempted to understand an entire country through my friend’s individual experience: I began to marvel at a culture with such a long, rich and interesting history. One of the key pieces of India’s puzzle (at least for me) is Ayurveda. I will not pretend to be fluent in the medical practice of Ayurveda, never the less: I find it fascinating. The diagnosis of illness and treatment in Ayurveda relies on examining your dominant dosha. Doshas are believed to be one of three life forces (or energies) in your body. They are said to be a combination of the 5 basic elements in the Universe. “People may be of a predominant dosha prakruti (constitution), but all doshas have the basic elements within them.” -Wikipedia (Learn more about doshas here: LINK)

You can take a fun test here and see what your dominant dosha is: http://doshaquiz.chopra.com/

The above dosha quiz is on a site written by Deepak Chopra. I have been interested in his views for quite a while. I saw him speak at a lecture once about 15 years ago…I recommend reading his books, instead. It was quite a snoozefest (although, maybe he was just having a bad day.)

I also own a fantastic hybrid style herbal remedy book by Andrew Chevallier. It is hands down the most complete, reliable and useful book in my library. I have relied on it to assemble my daily teas that I make from plants in my garden. I use this book a lot! 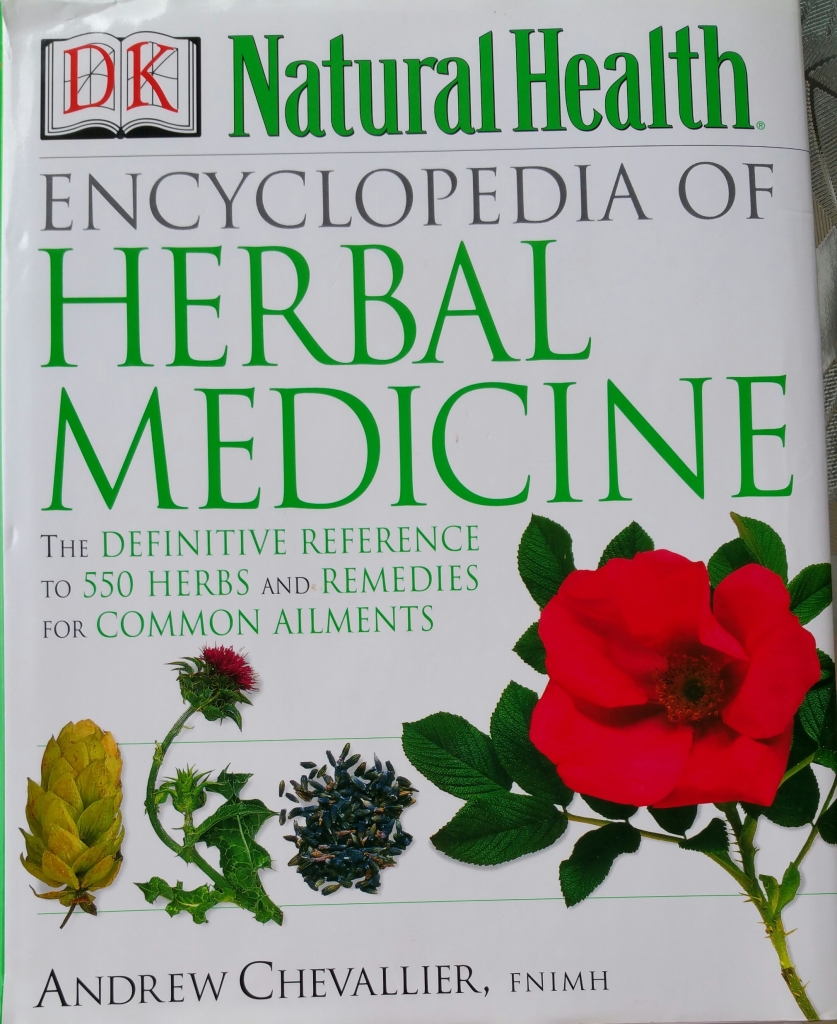 So, with my fixation on herbal remedies and interest in Ayurvedic medicine I stumbled across Turmeric milk (also known as golden milk, yellow milk and originally: haldi ka doodh) as a traditional cold remedy. I have been playing around with my recipe for this for several years. I am now at the point where I would choose (and do choose!) this drink over hot cocoa: I think it’s that good! My older boy loves this too and also prefers it to hot cocoa. 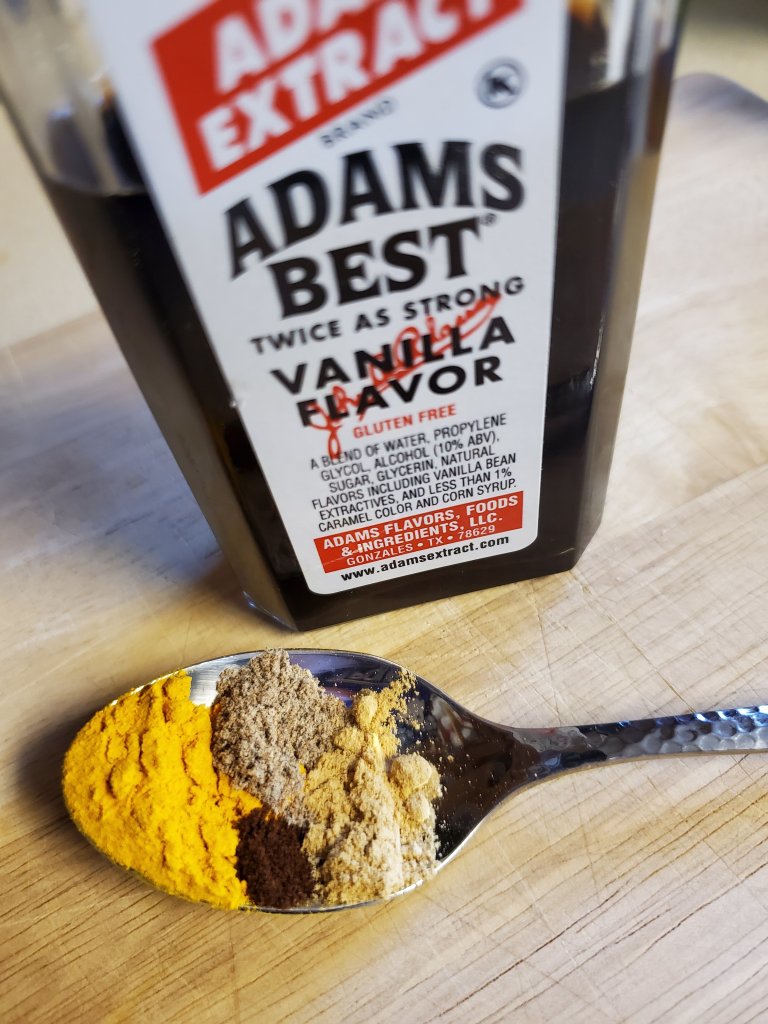 I can attest to its effectiveness against depression and I knock out colds with it regularly. I can’t take the herbal supplement pills because I get gastrointestinal problems. They’re just too strong. I still want the effect of turmeric, but I have to watch how I ingest it. That is where this recipe comes in.

I also add cinnamon (which is frequently cassia: a cheaper relative of cinnamon and interchangeable in labeling in the United States. Learn more here: LINK) Cinnamon is a folk remedy for regulating diabetes: “In addition to diabetes, Cassia cinnamon is used for gas (flatulence), muscle and stomach spasms, preventing nausea and vomiting, diarrhea, infections, the common cold, and loss of appetite.” (Source: Webmd ) I add it to my turmeric milk for flavor and because it is a “warming” spice that is supposed to help fight colds. Learn more here: LINK

I add the vanilla for flavor (I don’t use artificial vanillin, but you can. Artificial vanillin is a synthetic flavoring), it is reputed to help with digestion and fever: “People take vanilla to treat intestinal gas and fever.” (Source Webmd: LINK)

These herb’s health benefit claims are not scientifically proven but at the very least: they don’t hurt. Personally, I have found them helpful and you may, too. Either way, learning more about your dominant dosha is a fun way to try to wrap your head around your health and your body. A warm cup of turmeric milk is also a soothing way to treat yourself. You may also be improving your health by drinking it.

If you are prone to an upset stomach: I advise that you make sure that you use something with fat in it as the liquid base for this drink. I use cow’s milk but almond milk or coconut milk (etc) would work well, too. The fat seems to keep the spice from upsetting my stomach…and with this recipe: turmeric milk becomes a decadent wonder! You can definitely spend more time making this, but I’m more practical than purist, so this is how I do it:

Approximately 1/4-1/2 tsp ground Turmeric (You may also make a paste with butter or ghee and heat it with the turmeric before adding to the milk, although I now skip that step. You can also grate fresh turmeric into this if your grocer carries it. I would double the powdered measurement if you are using fresh turmeric.)

A pinch of ground cloves

Two or three drops of Vanilla

Sweetener of your choice: to taste

Marshmallows (If you really want a treat!)

Find a mug you’d like to drink this out of and fill it with hot milk or a milk substitute. If your milk gets hot enough that it forms a skin, skim that off or it will bind your spices together and they will sink to the bottom of your cup unmixed. (This is why most traditional recipes combine butter or ghee with the spices and heat them first. Going that direction will give you a more consistent mixture but it is extra time and extra calories that I choose not to use with this, especially since what I’ve usually got on hand is whole milk.)

Sprinkle the spices into the milk (You can decide to increase or decrease the amount of the spices to suite your taste and tolerance.)

Add vanilla and a sweetener of your choice (I use Truvia, which is a no calorie, sugar free stevia product) and stir until well mixed.

If you like: you can add marshmallows at this point (I totally recommend it!) 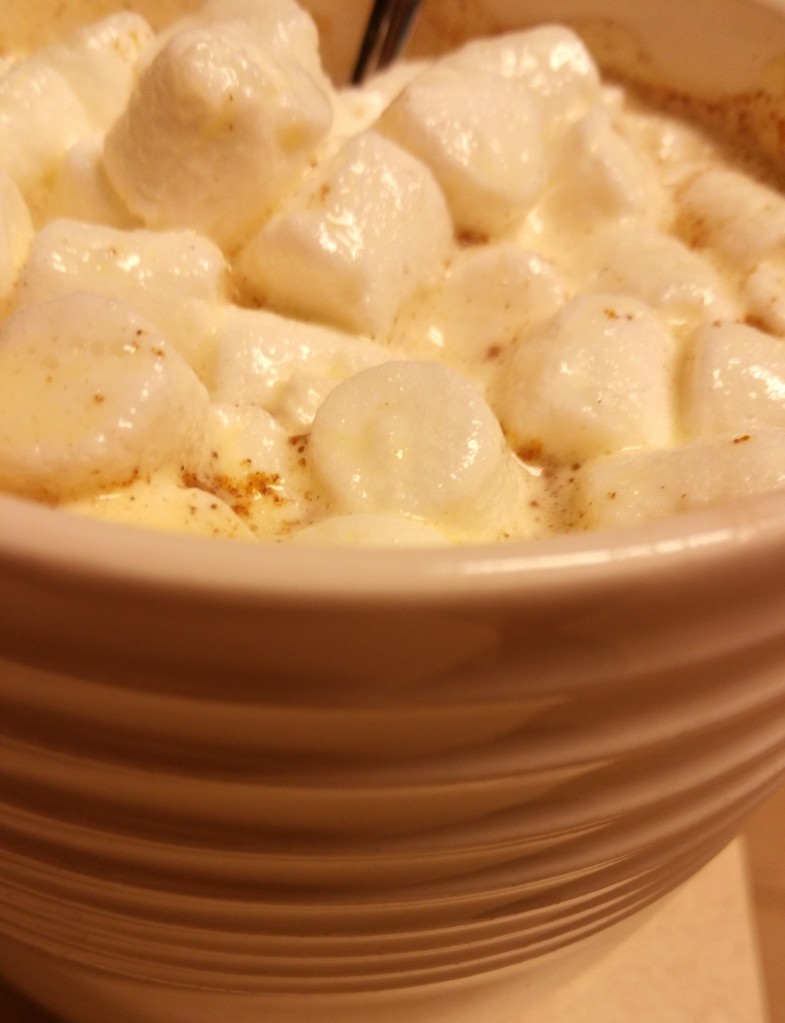 That is my cold/depression fighting, warm fuzzy, yummy, decadent way to get your daily dose of turmeric, vanilla, ginger, cardamom, cloves and cinnamon (and everyone deserves marshmallows when they feel yucky!) These should help you get well soon!

I also use the above supplements to help with a viral illness. I have found them to be very useful and I use them in conjunction with the turmeric milk. I use oil of oregano, garlic pills (You lose some effectiveness going with an odorless variety like I have in this picture.) and zinc. All of these together: usually keep me out of bed and I also deal with minimal symptoms. I recommend them, although you should be careful adding anything new to an herbal regimen. Make sure to read the instructions on the bottle and ask your doctor if any of these are appropriate for you or if they will interfere with any other medications you are taking.

We also use elderberry syrup. With sambucus (elderberry syrup), and the below instructions, we have the beginning symptoms of the first day of a cold and it stops the symptoms by the second day. We’re never sick more than a day and my kids never miss more than one day of school per cold. Viruses can’t beat sambucus and it tastes delicious! Between the two ideas (sambucus and oil) we’re never sick for more than a day and we’ve never had flu (and we don’t get the yearly flu vaccine, we don’t need it. There are options. This is ours.)

If you’ve ever tried “pulling” (putting oil in your mouth and swishing it around and then spitting it out. The oil binds with single celled organisms and you then spit them out.) I have an easier method that I swear by: put some coconut oil on the ends of a qtip and run the qtip on the very inside of each nostril. We’ve never had more than one day of school or work missed in a row using this method. I’m sure pharmaceutical companies will not be happy that I shared this! It works every time. You can add a drop of thieves oil or another essential oil, but it’s not necessary.

FYI: None of this works on the strep bacteria. If you suspect strep get into your doctor and get tested! We had round after round of strep for about two years. We got my kid’s tonsils out because I was catching it too, and they think that was what caused me to have two pulmonary embolisms. There really wasn’t a homeopathic option for that, but 1 year post tonsillectomy: nobody has had strep in the house. I’m on blood thinners for life as well, so I doubt I’ll have any more clotting issues! Strep was the boogeyman for us! It just wouldn’t go away. None of us are carriers either, as we wouldn’t always test positive. It was just a mess! I’m so glad we’re done with it!

On a side note: while I was fighting my cold I decided to make marmalade with the kumquats I grew this year. It was a great success but definitely not something you just “throw together and can”! I’ll post my recipe on here soon. In the mean time here are some pictures of my beautiful kumquat marmalade: