I do a lot of research before I try new things. There are two ideas floating around right now that I really liked. One is Hugelkultur. The idea is basically a huge, permanent, water retaining, slow composting hill. This is a great site about it: http://www.richsoil.com/hugelkultur/ Down here, anything that saves water is welcome. The other idea I have seen around is Keyhole Gardens. These are used in Africa. It is way to farm otherwise unusable areas. Best explanation I have seen is in video format (I almost never watch videos but this one was worth it.) http://youtu.be/ykCXfjzfaco I also overcame my initial feeling that Hugelkultur was going to be too massive for a backyard garden with this lovely lady’s breakdown of the idea that she labeled “Half-Ass Hugelkultur”: http://www.nwedible.com/2012/03/half-ass-hugelkultur.html (I really get a kick from this gal’s site!) Anyway, I decided with my emphasis on site preparation (and my wonderful husband offering his back) that I would bridge the two ideas and create something that incorporated the best of both ideas. I wanted the slow breakdown of wood (I used bagged mulch. I could have found something free, but I didn’t. It was a simple and disease and insect free choice, plus I was still recovering from an illness. Easy was the only available route. I did almost nothing on this other than instruction from a chair and the photography. It was a wonderful Mother’s Day gift!) 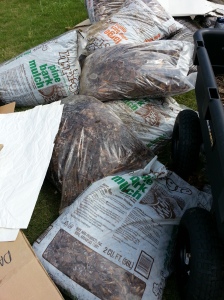 I had saved our packing materials from our last cross country move with this bed in mind. 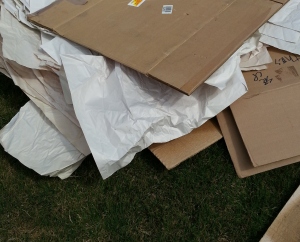 I also used rotted baled hay I had left over from another project. 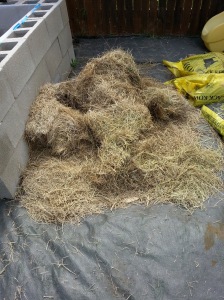 I used bagged soil and compost.

Most importantly I wanted to use the cheapest construction method I could find. I settled on cinder blocks. They are fast, cheap and pretty permanent. Since my husband lovingly volunteers to do the heavy labor, it was possible to use them.

We have evil Bermuda Grass (which I hate and wish I had never had the opportunity to try and deal with) so we sprayed roundup and laid landscape fabric over it. The cinder blocks are on top of the fabric. Like many of my projects this one started and stopped at random intervals. We got the cinder blocks down and I had some serious health issues that slowed our forward momentum. As the cinder blocks sat there I watched them wick water during the day. I soon realized these were going to make it a challenge to keep the bed wet. For better or for worse I decided to run plastic tarp around the inside of the cinder blocks. I taped the tarp down with painters tape to keep it up and out of the way as we worked. 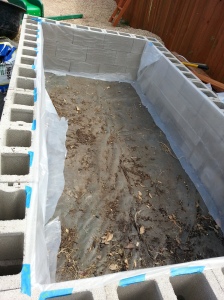 Next came the lining of cardboard and packing paper. 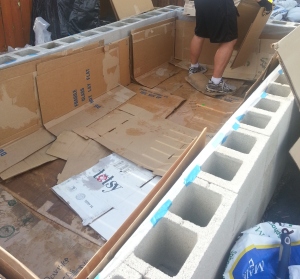 I made wire cages to hold the hay and the future compost material from the kitchen. I estimated I needed three to keep the bed hydrated and fed equally. (Chicken wire is a hazard to work with but I always seem to be using it.) 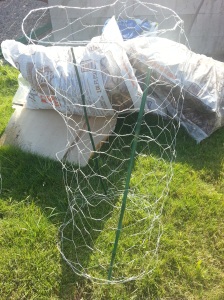 We filled the beds with mulch and placed the cages. 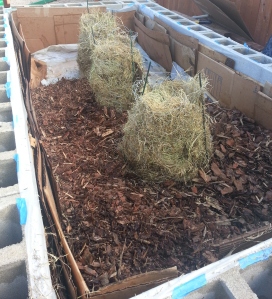 Added a layer of hay and the soil and compost 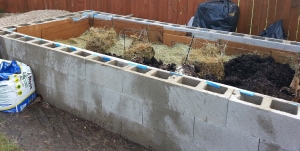 Then with some help from my boy’s favorite pet:

we mixed it rich with the expectations that the first season would be a rocky road: with the things that were composting drawing nitrogen and the soil not having enough adhesion to draw water effectively. 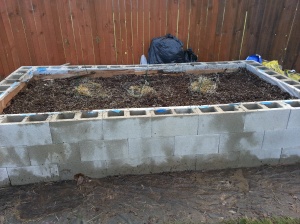 Despite the soil being new I have had a wonderful year. I have peanuts and Amaranth growing this summer and it has exceeded my expectations with it’s water retention…even in three digit heat. I love this bed, it will continue to bear the fruit of it’s (extensive) labor for a very long time with only minimal care from me. Thank you to all of the innovators who inspired me, and a very special thank you to: my husband and kids, for the best Mother’s Day ever!

Here’s an update! One year after building it the soil has settled and we were able to remove a course of the cinder blocks. We’re now building our second bed. Everything will be built the same. The only thing we will not use this year is the plastic. It really helped the original bed retain water down through the center of the bed, but has proven difficult to remove. I had originally planned on using much thicker ply plastic…but: “Do not look a gift horse in the mouth.” I love
this bed enough to duplicate it! 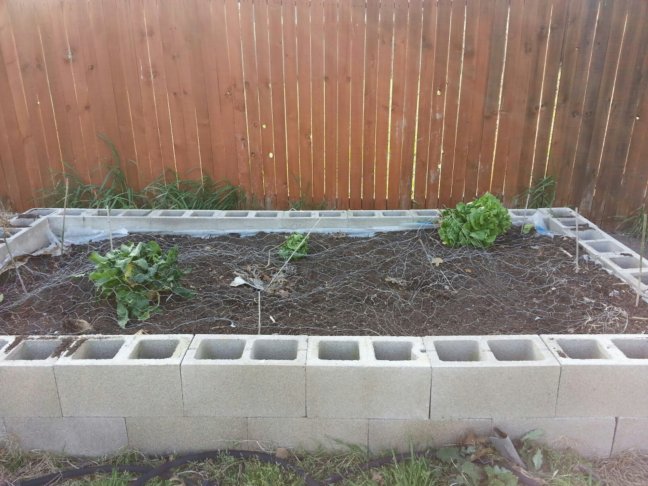 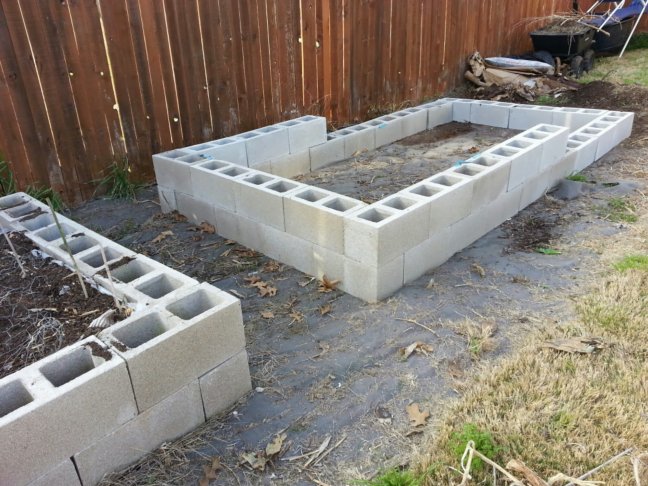