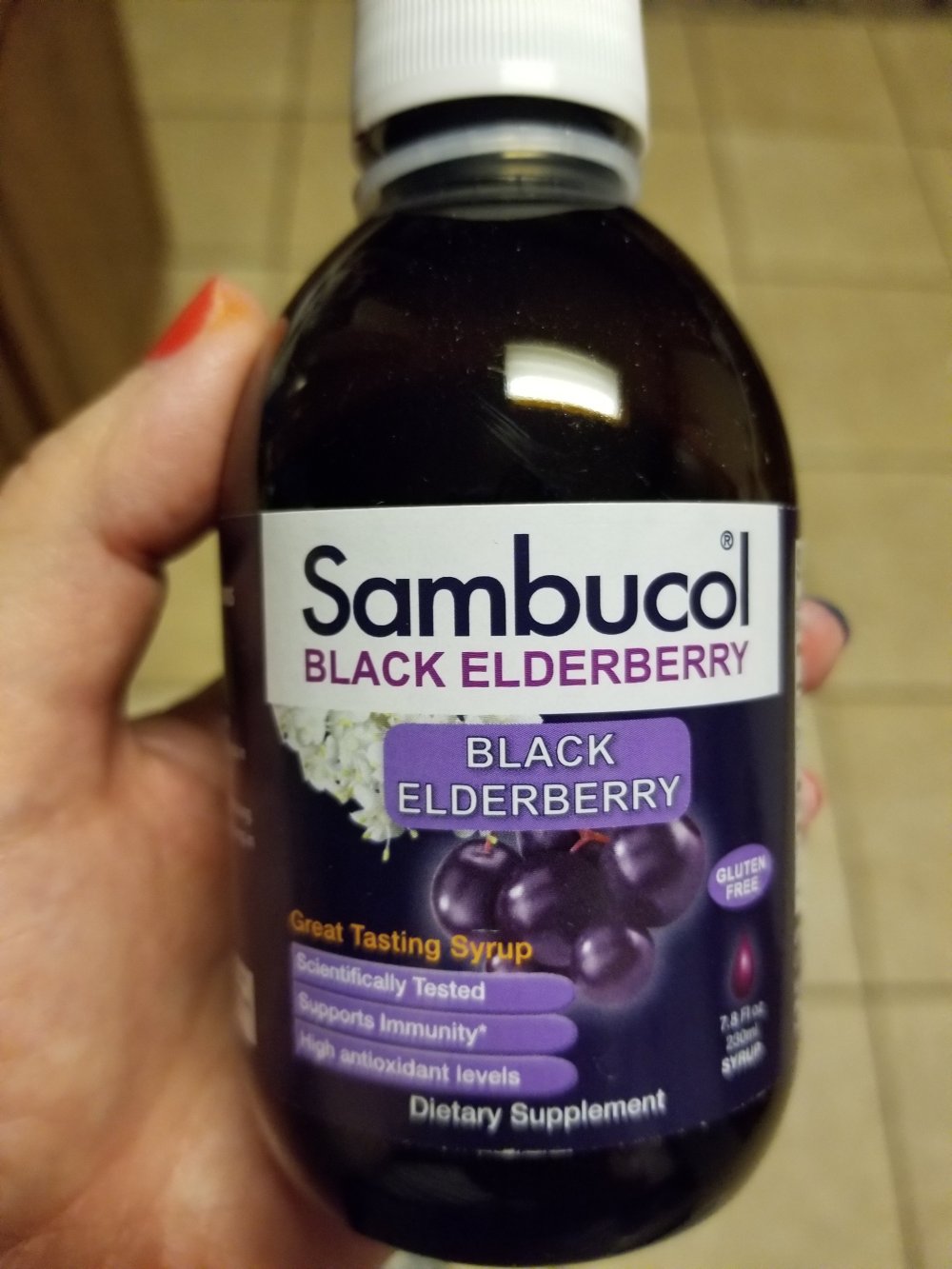 The brand we have at the moment.

We have a middle schooler and an elementary school student in our home. They both had their tonsils out last year because we had strep throat, every other month, for a year and a half (which was while my husband was working out of state, no less)… And I would catch it, too. I’m too old for strep! I would get really, really sick with it. 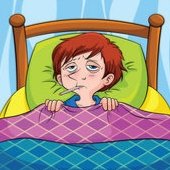 So, I’m more than a little aware that my kids get into germs at school, but with our sambucus, we were never, ever sick with any kind of virus. Bacteria, yes. But: no colds, no flu. Elderberries seem to have no effect on bacteria. But viruses just don’t stand a chance against elderberry! If you’d like to see how we knock out colds click here: Decadent Herbal Cold Remedy: Turmeric Milk 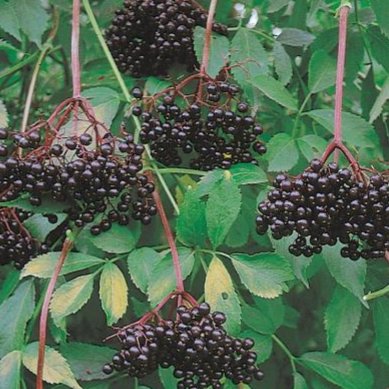 I have planted elders before (about 10 years ago), so I know what their habits are. They used to only sell Sambucus Nigra plants at reputable nurseries. Our native elders were poopooed by growers and looked down upon. But there wasn’t a lot of information or studies on our native elders back then.

Now growers are looking at the better frost/freeze tolerance and shorter stature of Sambucus Canadensis. Plus, our native elders can be sweet enough to eat fresh. This depends on your climate and the variety of elder. Although, I’ve read there is very little difference between named native elders other than offering cross-pollination (which makes for a heavy fruit set.) Because this is a relatively new commercial fruit crop there’s a lot of conflicting information out there. Stick with universities and other reputable sources for your research. FYI all parts of this plant, other than the flowers and berries, are toxic. “Cooking the berries destroys the glycosides present in the seeds, making the berries with their seeds safe to eat. Interestingly, research indicates that exposing elderberry to heat actually concentrates the polyphenols and anthocyanin’s.” from this website: source

Don’t forage the leaves for tea or let your kids play with the stems (which can be hollowed out for blow guns or flutes).

So far, it looks like the two fruit’s benefits are similar. The European elders (Sambucus Nigra) are what they use in commercially available sambucus syrup. S. Nigra are not hardy across the northern states in America.

I’m growing native, American elders (Sambucus Canadensis.) They end up about a third as tall and wide, which is good, because I’m running out of room for fruits. So far, both elders seem to be equally effective in studies comparing Nigra and Canadensis. The plants can handle freezes (not a big deal where I am). Plus, I can get Canadensis much cheaper. 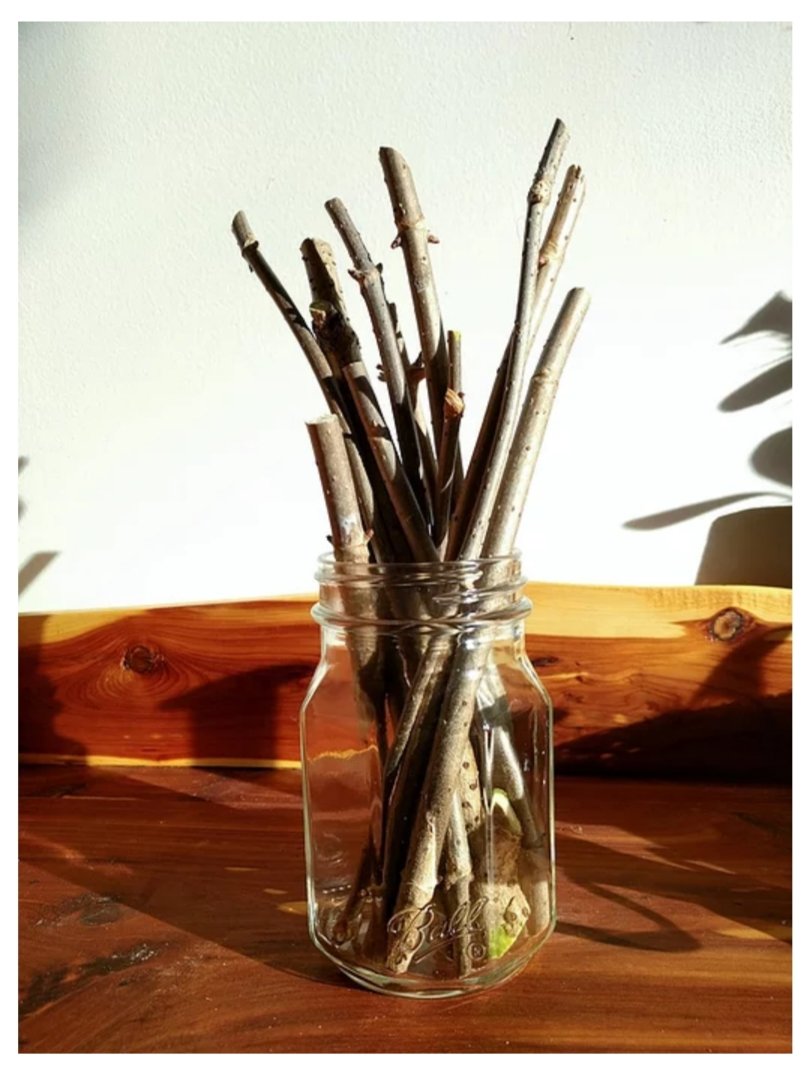 This photo is from the site I have linked below. Talk about a good deal!

This is a grower that sells the 4″ pieces of elder for dirt cheap (remember to get at least two varieties): https://www.riverhillsharvest.com/product-page/copy-of-elderberry-cuttings-adams

The last Elderberries I planted barely grew the first year and then shot out ten foot root runners (stolons) all over the yard in the second spring. They are weedy and sucker, and run everywhere. This is a stoloniferous plant!

The first two elders I put in: I put in beds (luckily for me, we moved and I didn’t have to do the work of tearing them out when they shot up everywhere.) 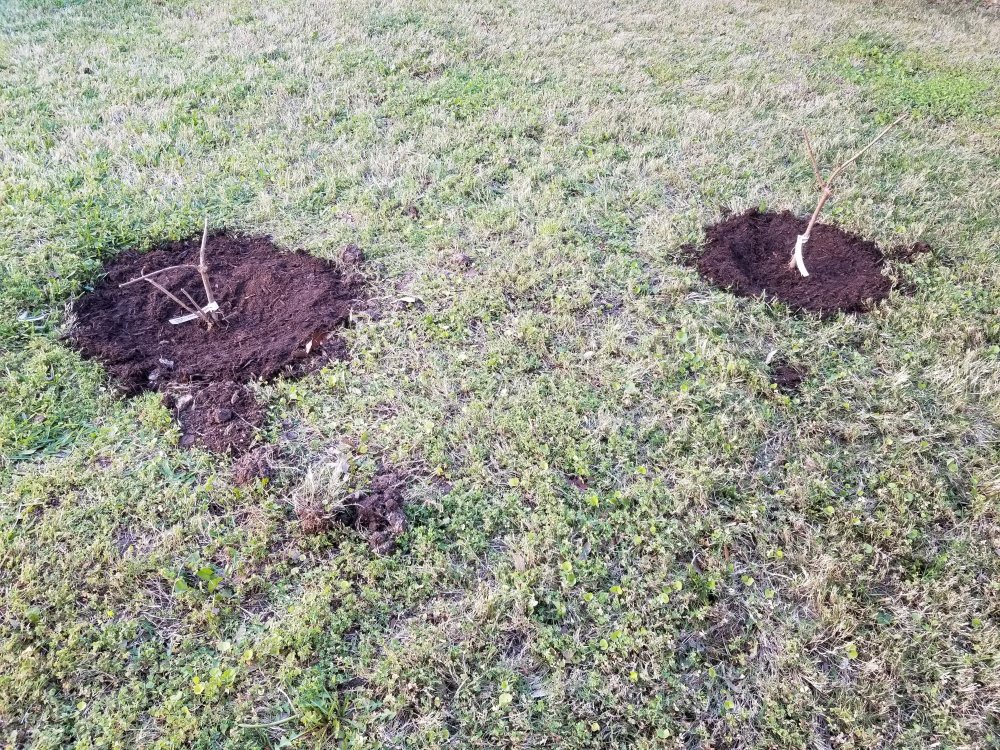 I’ve got mine planted with about 5 feet between plants, which is very close, and on the low end of spacing. I was going to plant them in the same hole, but chose this distance to make sure one didn’t out-compete, shade and kill the other.

My soil is Texas hard pan and if you’ve never grown in it think: potters clay and lots of limestone rocks. I hate digging in it. It’s heavy and slow going. To get anywhere I have to shove the spade’s blade into the soil and then jump onto the spade’s foot rest with both feet and hop up and down until I lose my balance: just to get another inch down. I have to do this over and over and over. It’s slow going, and why, after decades of this: the arches of my feet have problems.

Maybe I’ll take a video of this so people online can laugh at my version of old lady pole dancing… Or not… Probably not. I’ll just stick to entertaining my neighbors…

Back on track: I usually back-fill with native soil. Failing to do that: you can create a pot culture where the plant’s roots get lazy and only grow in the amended soil. I’ve had enough health issues this year that I just don’t care about that. I’m also dealing with Bermuda which has many, many issues. One of which is: it won’t die, so I have to avoid putting it back in the planting hole. I really hate the stuff! I wrote an article on how to conquer it here: Beds Over Bermuda Grass Or: Landscape Fabric Sandwich. Plus, maybe my laziness will discourage tons of runners.

I didn’t put the elders in beds this time. They are surrounded by lawn grass. I want to be able to mow these guys down, and keep them in the area of my choosing, not theirs! They don’t compete well with weeds, so adding a piece of landscape fabric, and mulching over that, is the way to go. 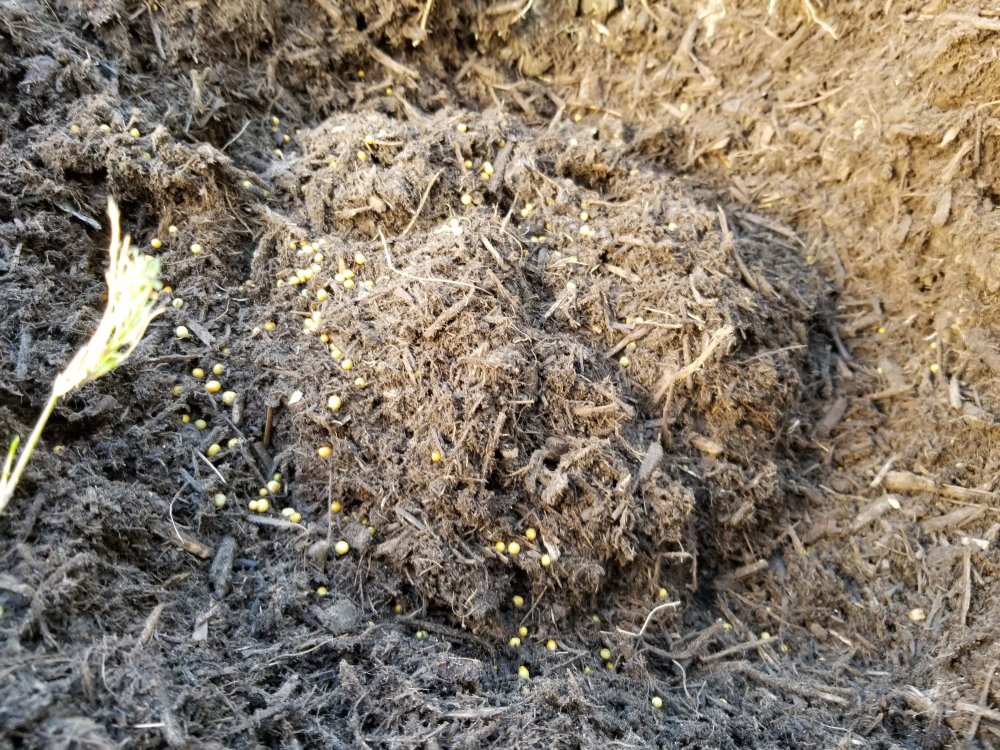 A mounded center planting hole. This keeps the roots growing down and outwards.

I’ve planted sea berry and sumac and had the same problem. The sea berry were incredibly thorny. I don’t really care for sea berry. They taste kind of like a muddy, earthy, orange juice. Blech! But I love elderberry, so I’m growing them again.

I’ve also gotten a few recipes for elder flowers, so I’m excited to see what those will be like.

I bought named American elders this time around. You can dig up wild ones on the side of the road in some areas, but fruit and fruit production are greatly increased with nursery cultivars. These are propagated by cuttings, usually about 4″ long, that were stuck in the nursery’s soil and grew from there. They tend to grow a bit, then develop a knob and shoot branches out from that. If you buy bareroot elders it may look like it’s grafted. Trust me, it’s not. That is where the top of the short piece the nursery stuck in the soil was. The apparent graft union, is just where it started growing again. This is a weedy plant and does not warrant the work of grafting. 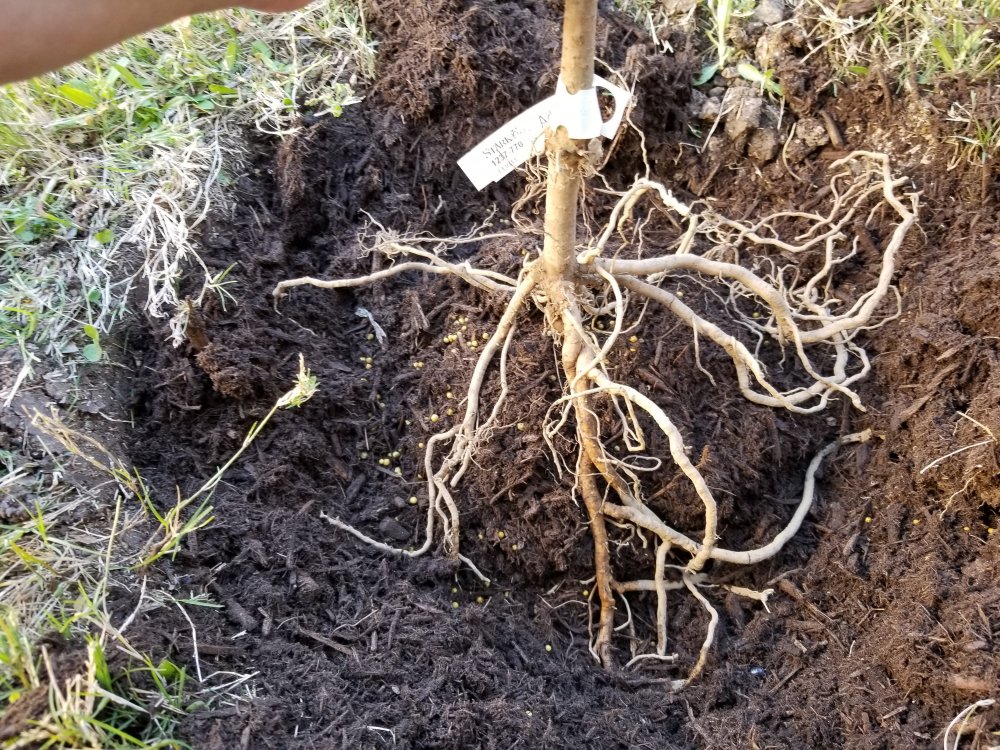 It’s easy to keep everything in check by removing whatever comes up in your yard aside from the plant you put in. Mow freely, because anything that will grow to 10-20 feet from a four inch piece of branch is going to be a bully. 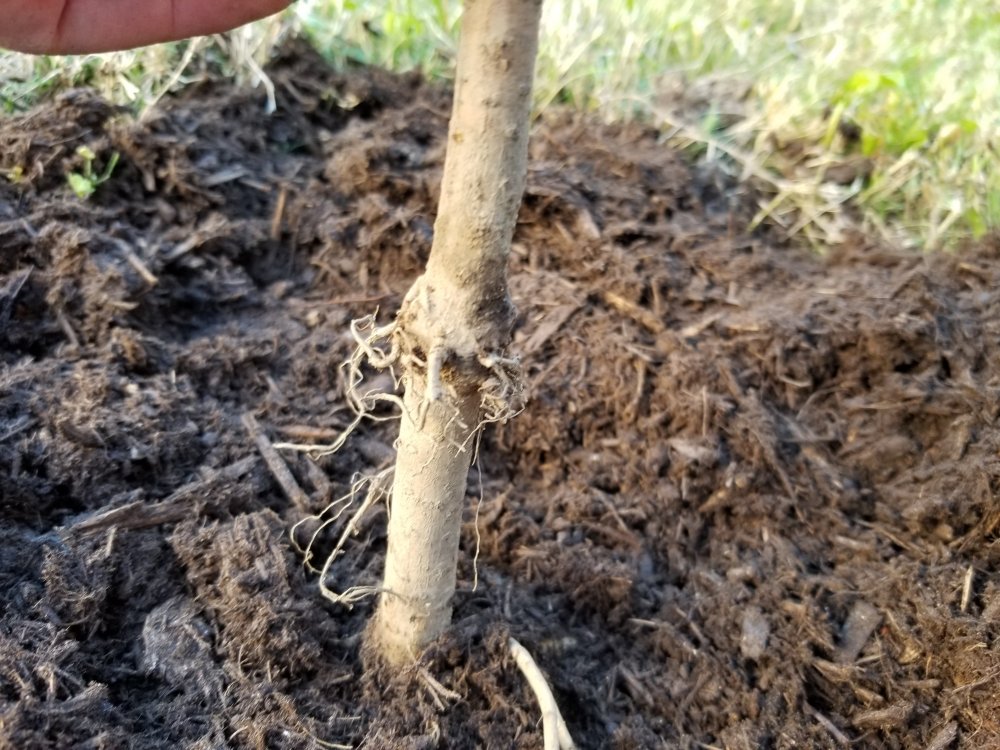 It looks like a graft union, but it’s not.

My instructions said to plant two inches deeper than in the nursery pot. So, I’ll do what they say. I’m guessing, because the roots are fibrous instead of a tap root, that the more roots you can get to come from the stem, the better chance your plant will take drought. 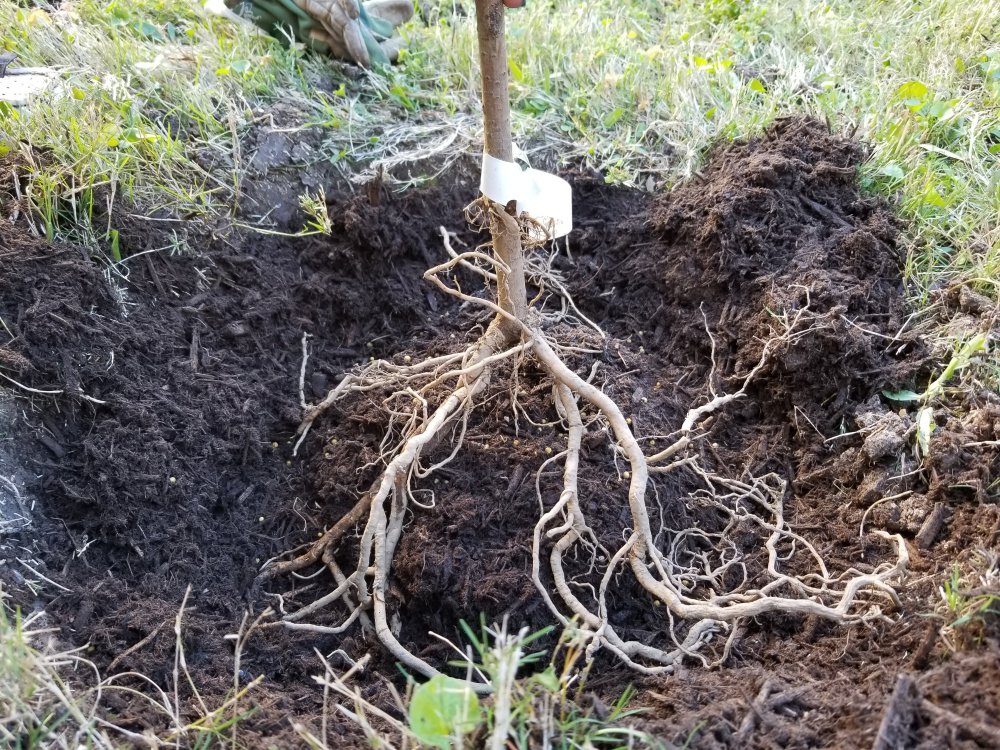 BTW elders DO NOT like wet feet. That is an old wive’s tale. They like good drainage and can take occasional flooding (they are good for riparian areas) but they won’t last long if it floods, and sits there, without draining.

In the field, commercial farmers frequently plant in mounds to assure drainage (these would be great on top of a hugelkultur!) then cover with landscape fabric, mulch and some sort of watering system. 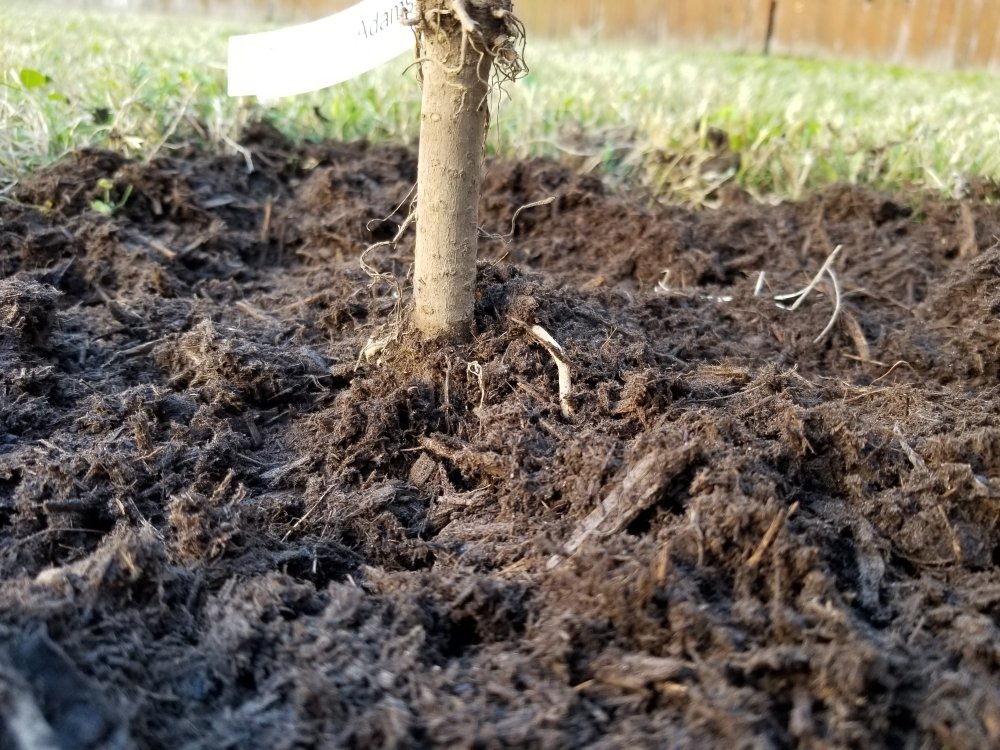 Farmers recommend cutting the bush to the ground annually. This does three things: It keeps the branches the same height, makes the berries fewer, but larger, and makes harvest easier by trimming ripening times (from over a 4-5 week period to 3-4 weeks). Most home growers need their fruit (that they need to process) to ripen in a short period of time so you aren’t waiting until you have enough. Most people just let them grow and take care of themselves without major pruning, but I’m going to do the removal of above ground parts yearly, I believe I will be happier with the results. (I borrowed a bunch of these photos. I’ll replace them when I have my own.) 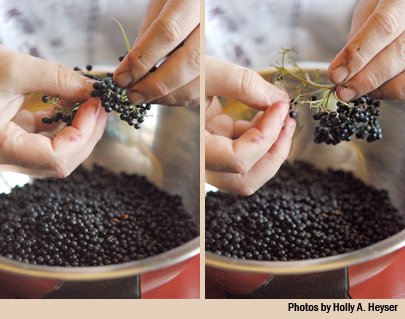 It’s recommended that you use a fork, to run through the berry laden stems, to easily remove berries.

I liked this growing site, just the right amount of information! https://www.extension.iastate.edu/smallfarms/agroforestry-farm-elderberry There’s really not a lot out there, so where ever you are: it’s an experiment! I love experiments! 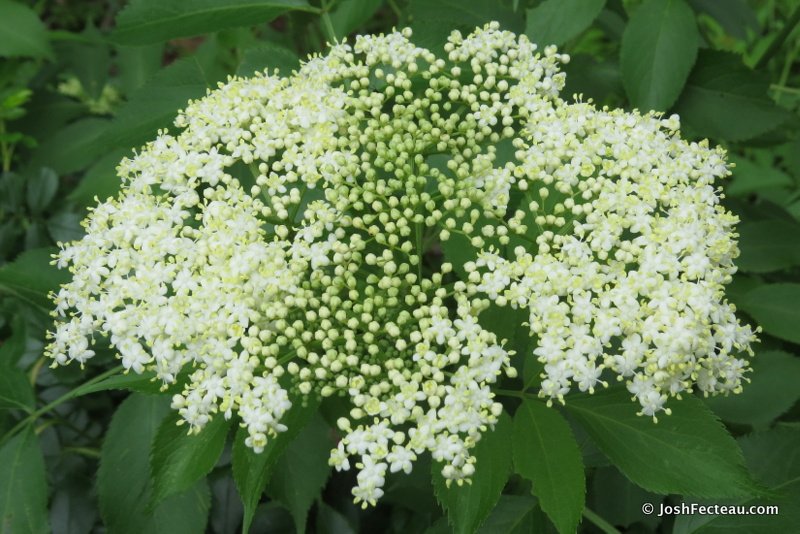 During harvest, you cut off the entire berry cluster (or flower cluster, they’re both edible) at once, either as the flowers first open or when the berries are black and soft, but before they shrivel. Flowers show up around late June with berries between August – September, depending on the variety. 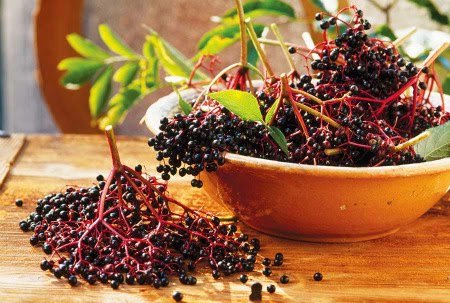 Berry processing usually includes drying the fruit (for recipes, for cordials, and cold remedy syrups) or straining them fresh and freezing, or canning, the juice in the way you plan to use it. The flowers are made into fritters or spirits. Both flowers and fruit are used in many, many ways. Just be aware that Elderberries stink while they’re cooking. I’ve heard it described as a cabbage smell. My mom told me my sister in law cleared the house out cooking hers. It isn’t gross when you’re done. It’s sort of like my experience cooking with Garden Huckleberry. You can read my article on that here: Garden Huckleberry: A Completely Nutty Science Experiment 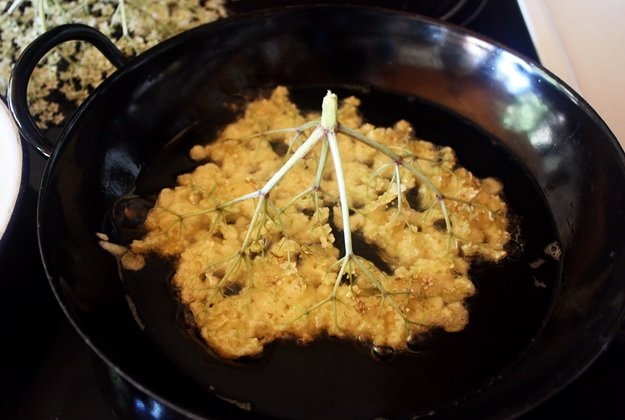 “Your mother was a hamster and your father smelt of Elderberries!”

I hope you enjoy growing your own sambucus! Let me know your favorite use for these super berries!